You are here: Home › Uncategorized › The leaning tower of PISA (testing)

Among top news items last week, prior to being eclipsed by the death of Nelson Mandela, was the release of the most recent PISA (Programme for International Student Assessment) testing results. If you want to learn more about PISA you might check here, but, in a nutshell, PISA tests are  for 15-year old international students in math, science and reading. The release of results last week by the OECD (Organization for Economic Co-operation and Development) reflects 2012 testing of roughly 500,000 students in 65 countries.
So, who’s on top and who’s not? Asian countries show strongly for PISA test results, followed by mid-European countries, Canada posted a 5th in science but 13th in math. The US? 36th in math, 26th in science. Finland, the ‘Scandinavian miracle’ of just a few years ago, lost out top honours, but not by too much.
Naturally, there has been much pencil-chewing and thumb-biting over these results, and various headlines trumpet their biases ranging from “PISA scores show failure of market-based reforms,” to “Slipping test scores bode ill for future”. 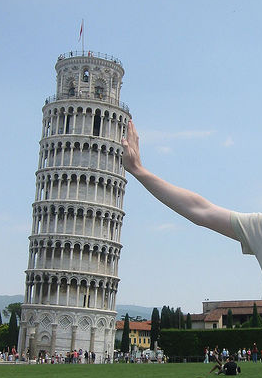 Stop propping this up! The leaning tower of (PISA) testing deserves to fall.

Then maybe we’ll have the debate about such testing that would actually help us create sounder education policy.

I think reading much into standardized test results is a specious undertaking. So what if the OECD has collected Big Data on standardized test questions? It doesn’t change the fact the results are drawn from standardized test questions that have built-in biases and characteristics that, naturally, influence the results. Culture and predisposition to test-taking are two such significant influences.
Unfortunately, PISA testing is rarely scrutinized closely, as it should be, before largely uninformed pundits start chomping about the results. The Globe and Mail’s Jeffrey Simpson exemplified this, calling in a column last week for BC to turn its back on its new BC Ed Plan, which emphasizes Personalized Learning. In my comments to him I suggested he get much better informed about a subject he clearly knows very little about.
A much more informed and fair dinkum response I read was by University of Oregon Education Professor and award-winning author Yong Zhao. In his blog, Reading the PISA tea leaves (here) he correctly identifies many gaffes in interpreting PISA results.
Education is complex and multi-faceted; establishing clear and appropriately policy deserves a fairer shake than most of the flawed arguments I read about PISA test results.

For information on my book: Learn Your Way! SelfDesigning the Life You Really Want, Starting Now (2011) and to order a copy, go here.