You are here: Home › Uncategorized › ‘BIG DATA’ is your friend! … Not Really

Unless you’ve taken up residence in a cave or hermitage, it’s hard to escape a message these days that the future will be, and is being shaped by Big Data. Where yesterday’s data – let’s call it Little Data – was based on sample sizes easily grokked by the average citizen (of n = 1,000 or even 10,000), Big Data has worked up its swagger by drawing on input numbers in the 100,000 or 1,000,000 range, or even larger. In other words, the difference in information input has grown in orders of magnitude.

This is a fairly recent phenom, and you might be wondering how did this come about? Well, Big Data is powered by a seemingly infinite number of inputs or sensors that have found a home in the Cloud as well as our cells, and almost all cases are based on technological systems capable of everything from genetic profiling to tracking our respiration rates while sleeping to, well, many many other things, evidently.

If you don’t remember ceding your authority to someone to do this, you’re not alone. But when you installed all those new software systems in the past decade on your computer and devices, or went to your doctor, somebody may very well have snuck this into the fine print of those agreements. And if you listened closely, what you heard as you clicked the “I Agree” box to the Terms of Agreement sounded a lot like “Gotcha.” Sometimes, as in the case of Big Education Data, no permission was ceded at all. 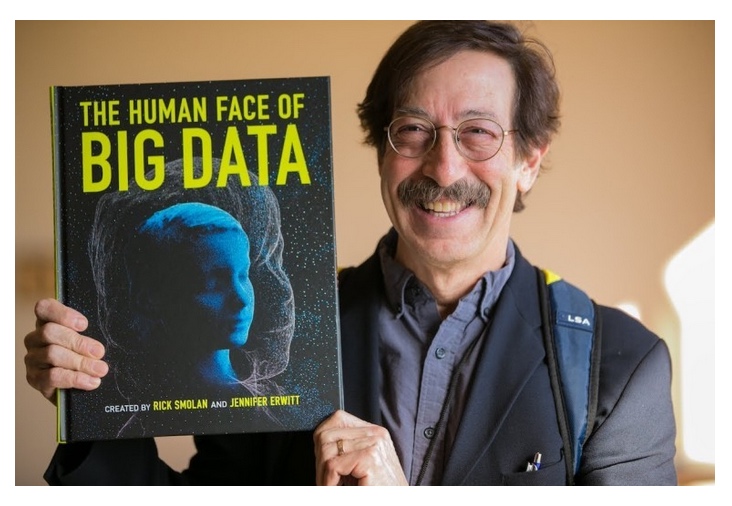 The Human Face of Big Data is a new documentary from PBS. Producer Sandy Smolan (above) says BD will soon just be part of the fabric of our society. Let’s hope he’s wrong.

Yet indeed we have been ‘got’. And it’s time to wonder if we should be alarmed by this harvesting of personal information by other entities that are generally associated with ‘Big’ enterprises: Big Tech, Big Pharma, Big Med, Big Education. Big.  Perhaps, to no surprise, the pitch men and women of Big whatever exhort us to fear not, Big Data is our friend! The logic of their various pitches is practically unassailable: after harvesting and analyzing Big Data sets, with the help of some additional algorithms Mr. Big will deliver technology-derived solutions to whatever plagues us according to our problematic data profile: medical prescriptions, fitness programs, remedial education suggestions.

Of course almost nothing proffered on the solution-side of Big Data is free. Your ‘Fit Bit’ costs money, so do the designer drugs and the monitoring apps as well as the tutoring sessions. Not the Big Money that companies are counting on from their ROI, but not peanuts either.

Ouch. I’m not buying the Big Shrug. I see Big Issues arising from Big Data, issues that are practically non-reported in the gushing news stories and pronouncements about this new Valhalla. This was so evident in a new PBS ‘docu-vertisement’, The Human Face of Big Data, airing Feb 24th, I thought it was solely produced by a data assets management company. I feel the same reading medical journals and texts extolling the virtues of “Individualized medicine” in which all the “individual” information medicos need to know before writing a prescription is drawn from a drop of our blood. Forget a personal interview or conversation, that’s unnecessary and inefficient in the new data-driven technocracy.

And as an educator, I feel much the same when considering British edu-data professor John Hattie‘s much-venerated Visible Learning prioritized list of (138) approaches to educational issues drawn solely from Big Data sets. As I read his list I can clearly identify that were I to have prioritized my educational approach based on his list, I would have made hundreds if not thousands of errors in my day-to-day pedagogy that arises in intimate relationship with real learners. That’s not much of a bargain in my opinion.

And that’s the problem as I see it on reviewing the issue of Big Data, there’s an implicit trade-off arising in this bargain, one that we’ve been warned about before. And without adequate, balanced discourse about it, individual and societal rights risk being overlooked and abused as we rush to the altar of technocracy.

The late University of Toronto professor Dr. Ursula Franklin asserted years ago that technological systems are almost invariably anti-human, despite their claims to the contrary.

And the question she posed in her award-winning book The Real World of Technology about the ascent of technocracy – in the absence of any real debate or scrutiny – is suitably apropos to the issue of Big Data:

“Somewhere, someone will have to ask, ‘How come the right to change our mental environment—to change the constructs of our minds and the sounds around us—seems to have been given away without anybody’s consent?'”

One Response to “‘BIG DATA’ is your friend! … Not Really”