You are here: Home › Uncategorized › If We Want Imaginative & Creative Kids the Education System Must Prioritize This

According to developmental psychologists, the foundation of human imagination emerges in childhood and its lifelong trajectory reflects the nature of the support that nurtures it during this time.

Bolster a young child’s budding imagination at home or in school with encouragement and she will sense this and accept more risks in whatever activities and challenges she faces. Such encouragement will prime her to get up and try again when she faces setbacks that would otherwise discourage her. Multiply that a thousand or ten thousand times and a young adult will emerge with the confidence to try, stumble, and try again until she’s satisfied with the results produced.

On the other hand, if you habitually fertilize a young imagination with doubt or fear or conditional “yes, but” responses, the emergent character of that person will be hesitant and wary of really extending himself for fear of censure and loss of self esteem.

The first example identifies the foundation of a life characterized by enduring resilience and an increasing ability to live an adventurous, creative life. Such a life will be characterized by stubbed toes, literal and metaphorical, but also by grand visions borne in the imagination and attempts to actualize those visions. Some of these will come to fruition.

The esteemed creativity researcher Paul E. Torrance circumscribed guidelines for a creative life with his eponymous ‘Manifesto for Children‘ in 1983 (image below). Since then, his guidelines have achieved a camouflaged celebrity, caught as they are between a schooling system etched, for the most part, in an imagination-stifling regime and a societal yearning for the much-sought-but-elusive innovation. 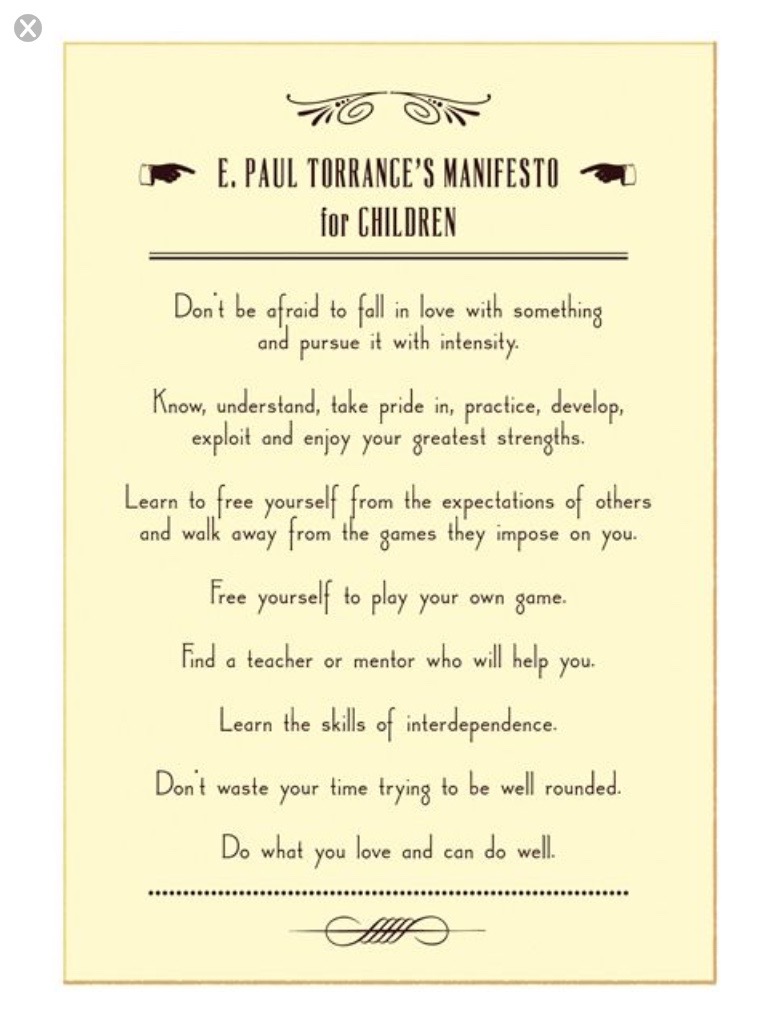 Paul Torrance’s ‘Manifesto for Children’ fits well into our era of Personalized Learning. Can schools uphold it? SelfDesign certainly does.

At the end of the day, or rainbow, we need to clearly see or identify the character of the young man or woman emerging from our education system. If we want that person to be resilient, self-determined and confidently imaginative than the education system they encounter throughout their schooling experience needs to prioritize that kind of character nurturance. For the most part, the current path of conventional schooling remains dominated by locked-in curriculum that impedes the creative and innovative destiny we say we want to inculcate in today’s children and teens.

“If you judge a fish by its ability to climb a tree, it will live its whole life believing that it is stupid.” – Albert Einstein